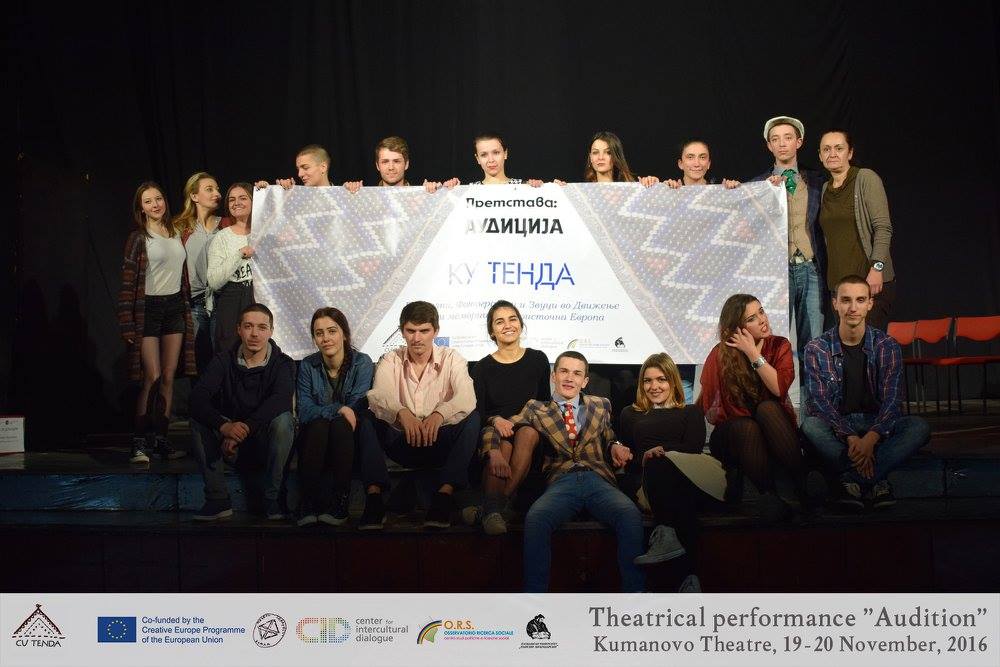 For several months now, a group of enthusiastic young people has been gathering every week to prepare and rehearse a theatre play titled ”The Audition”. The play is part of the project ”CU TENDA: Stories, Images and Sounds on the Move; Living Memory of South-Eastern Europe”, supported by the European Commission through the Subprogramme Creative Culture – Europe.

The screenplay was written by Keti Doncevska Ilic, a renowned actress who works in the Kumanovo theatre and collaborates with CID on several projects. The 90 minute play tells the story of a group of people who find themselves in a tiny, dusty room, waiting for an audition that promises 1 million euros as a prize. Nobody knows any details about what is actually supposed to happen during the audition. While kept in the unknown and waiting indefinitely, the people engage in conversations that bring to surface human problems such as inequality between women and men, stigma against homosexuals, ambitions and self-interest, stereotypes related to the Aromanians, the influence of religion on personal development, etc.

The public was laughing, sighing, smiling in awe and applauding the newly-born actors several times during the play. Plot-twists are not missing from the story, and the acting of the youngsters who are doing it for the first time is absolutely impressive!

The ”Audition” was played in Kumanovo on 19th and 20th of November and both times filled the auditorium of teh Kumanovo Theatre. FOllowing the huge success of the play, it will come soon to Krusevo and Skopje.

Ivana Stefanovska, one of the young actreses, about her participation in the play:

This was one of the best experiences I had in my entire life. I’ve never been on stage before and it was a privilege discovering a new world where we presented the local reality in Macedonia, but still through a fantasy story. I was really devoted to the project and I’m so thankful to the luck I had when Keti called me and invited me to be part of this group of people who now are like my second family. I am playing a grumpy girl who is mad at the world. I get to scream and be ironic all the time, and the comments were uncanny! Everyone I know told me that it was fun watching me playing a role that was the exact opposite of how I am in reality and that was a huge compliment. Again, I am so thankful, these were the best months of my life and I’m so glad they’re not over yet and we got really close as friends, as a family actually. I am enjoying every part of this experience, even the parts in witch we are all stressed out. But it all worked out just fine and it was all worth it.

The photos from the play can be found here.