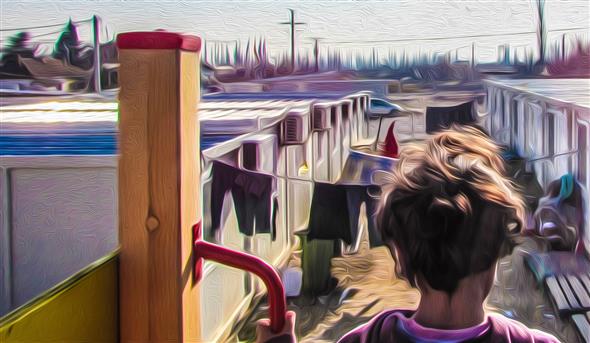 In the framework of my EVS-project about Acceptance and Tolerance, for about one month now I have been working in Tabanovce refugee-camp. I spend three-four days in a week in the camp with the team of LEGIS, that has been working in the camp since the beginning of the so-called crisis. The refugee camps are the result of Macedonia closing its borders in March 2016 and hence blocking the route for migrants to pass from Greece to Serbia and from there on to EU countries. Since March a couple of hundred migrants are stuck in the camps in Gevgelija (in the south of Macedonia, on the Greek border) and in Tabanovce. The migrants who have chosen to seek asylum in Macedonia, have recently been admitted to transit centers in Skopje where living conditions are slightly better. However, the majority of the people in the camps do not want to seek asylum in Macedonia as their plan is to continue to Germany or to other Western European countries where they might have family- or other ties.

Tabanovce refugee-camp is located around 10 kilometers from the town of Kumanovo, on the Serbian border, by the village of Tabanovce. The official number of persons in the camp is considered to be around 60, of which almost half are children, but on top of that there is a constantly evolving number of migrants staying in outskirts of the camp who, depending on day, are or are not allowed to enter the camp to receive food and other humanitarian aid. The majority of the people in the camp are from Syria, Afghanistan and Iraq. Lots of them are families, but there are also some unaccompanied minors. Alongside LEGIS, many other NGOs work in the camp daily (Red Cross, UNHCR, UNICEF, MYLA, IOM, Helsinki Comittee, La Strada…). The entries and exists are strictly controlled and only persons holding a permit can entry the camp.

Concretely, what we do with LEGIS, is that we bring food-packages that then are distributed to the people in the camp by Red Cross, organize activities for children and adults and just “hang around” to talk with people and help them with whatever they might need. Currently we do not

have any officially planned activities in the camp, we rather work according to needs and demand of people; when we go to the camp I usually have in mind what kind of activities I would like to do with the children that day; however I might end up doing something completely different. The activities vary from drawing, doing crafts and photographing to language lessons and physical activities like playing football or learning acrobatics. One activity I did that children were really excited about was writing letters to their friends and family members in other countries. Most of them wrote to their relatives in Germany and even added photos in the envelops. I sent all the letters that children could provide an actual address for. With adults, doing activities is harder because it is difficult to find meaningful activities that they would be interested in – after all, all they want to do is to continue their journey to Western Europe. Our role as volunteers is not to force them to do anything they do not want to, instead what we can do is to talk and listen to them and help them with issues they might have. Sometimes we manage to gather adults to play table-tennis, football, do jewelries or to learn languages – anything that makes the time that is so long to pass even a tiny bit faster.

The migrants in the camp live in containers and many NGOs have their own in which they organize activities. Currently the camp is quite empty compared to how it used to be and the

facilitates seem to be quite all right. The biggest problem is that many people have spent up to eight months without freedom of movement in the camp; the people are not allowed to leave the camps in Macedonia, which makes the conditions prison-a-like. The children cannot go to (proper) school and the adults cannot work, visit cities or keep up in almost any way with normal way of living. That also keeps them separated from the Macedonian society, not having any contacts with Macedonians, apart from those working in the camps, and not knowing much about the country despite having stayed here almost for a year. People are very frustrated because no one knows how much longer the situation will last.

Personally the issue that concerns me the most is the conditions of those not being able to live in the camp. Nobody really knows the reason why some people can stay in the camp and some cannot. Many seem to think it is a question of country of origin; some people are considered refugees and some are not, even though legally speaking nobody is a refugee at that point and in any case being a refugee has nothing to do with ones country of origin as the refugee-status relies (or should rely) on individual persecution. Anyhow, even though the majority of the migrants not having access to the camp have this last month been from Northern African countries, recently there have also been Syrian migrants amongst them and even some families. It is somewhat ironic that for the migrants inside the camp the conditions are comparable to a prison, but for those outside, the conditions are even worse; sleeping in the “jungle” (forest), not having a guarantee of food or any other humanitarian aid on a daily basis and facing violence both by the police and the smugglers. The situation is really absurd because there are not many options for these individuals; borders are closed making it really difficult to cross to Serbia or to go back to Greece, even though some of them might have temporary residence permits there. Therefore for some of them the only choice is to stay in Macedonia where they are not welcome in the camps either. Even working with them as a volunteer is very complex because of certain rules in the camp and hence any little thing like distributing food, charging a phone or just having a conversation with them feels like a little victory – which is ridiculous, because having a conversation with someone should absolutely not be considered illegal. On top of the other challenges these people are facing, it is getting very cold in Macedonia and temperatures going down to -10 degrees Celsius in the night make it urgent to resolve the situation.

I do not deny that sometimes it is very frustrating of not being able to do anything about certain situations in the camp and to collaborate with people who have very different views about how to work in these kind of situations, what is right and wrong and how you should talk about refugees and migrants, for example. But despite all that, working in the camp is also lots of good moments both with children and adults. Seeing children’s smiley faces when arriving to the camp and seeing them excited about the activities proposed are one of the greatest moments of my days in Tabanovce. Having conversations about life, hearing stories of different countries and having moments of laugh with the people are always such a delight. And it is not only about giving or “helping them” (a term that should be banned anyway), it is also about learning from them, sharing with them. In the same way that I am interested where they come from, what are their plans and dreams for the future, they want to know who am I and where I come from. I might be able to teach them English or French but I have also been able to learn some Arabic – and trust me, the children are very excited when they get to be teachers! I think it is very important for everyone to keep in mind that the migrants are not only “poor victims”, just as much they are not “potential criminals”, like media tends to picture them – but individuals just like anyone else looking for a safe place to live, who has a huge potential in them if they are just let to use it.