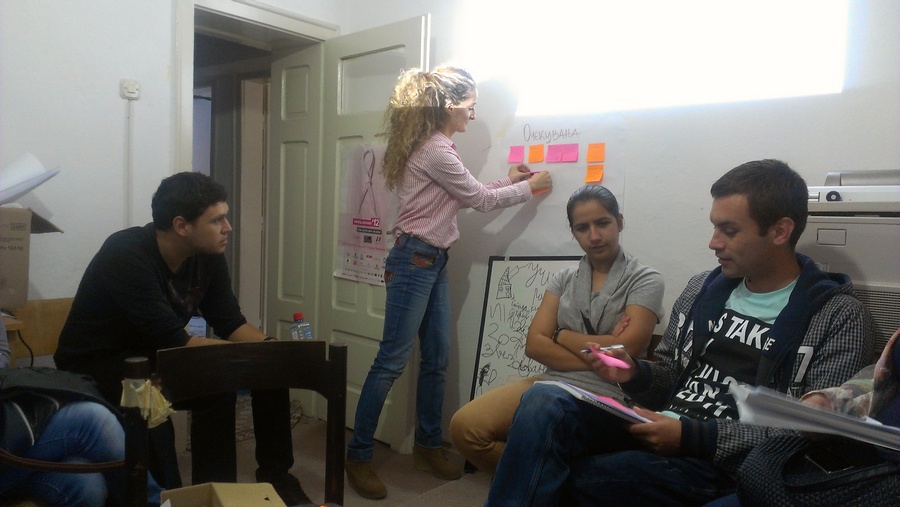 What is an advocacy campaign? Where do you start if you have a good idea about contributing to the development of your community? What kind of problems does the youth in your community encounter? Ten young people from Sveti Nikole were challenged to work on these questions during the 2-day training “How to make advocacy campaigns” on 18-19 October 2014. The training was conducted by Milos Ristovski and Lendita Ajdini from Center for Intercultural Dialogue (CID) and is part of a wider campaign organized by the National Youth Council of Macedonia (NYCM) in several cities around the country. The aim of this project is to empower young people by giving them the opportunity to develop and implement their own projects according to the needs of their community.

The first day of the training focused on clarifying the main concepts such as youth participation, advocacy campaign, democracy and human rights. The participants enjoyed the group activities, in which they had to discuss the ´Ladder of Youth Voice´ through several examples in order to make the difference between youth participation and what is mistakenly taken as youth participation; another activity challenged them to look for popular examples of campaigns – both nationally and internationally – and to draw conclusions about the features of a successful campaign. The last part of the day involved a guest from the secretariat of  NYCM, Dejan Jovceski , who presented the organization and offered his support for the future collaboration. Asked about what they liked the most, the participants highlighted the teambuilding activity and the ladder of youth voice: ”I discovered for myself more ways in which young people can get involved and I feel more confident in trying to give life to my ideas”, shares Valerija.

The second day stepped into exploring the problems that the youth community in Sveti Nikole encounters. The prevalent problems identified by the participants were unemployment, lack of cultural activities and the low level of youth activism. The group decided to focus further on the last problem and got the task to draw a ”Tree of Problems” in order to identify the main causes of this problem and its effects. This activity served as a support for building a list of objectives that would address the causes of the low level of youth activism and for identifying the activities that would cover these objectives. After a fulfilling lunch the participants got back to work, focusing this time on the practical aspects of planning and writing a campaign proposal. Their final proposals will be sent to the NYCM for funding approval.

Spending one´s weekend working is an extra effort, but the participants were satisfied with the outcomes of the worksop. ”I felt a positive vibe throughout the workshop, now I am more motivated to do something for my city. I am glad I attended it and connected with other young people, now the challenge feels less difficult” – these are Sanja´s impressions. Elena is thankful for the interesting activities and the fresh input that she had these two days as well as for being able to discuss and put into practice the ideas that she thinks will make the life of youth in Sveti Nikole more interesting.