“It’s an honour to be young!” – Activate Talks conference 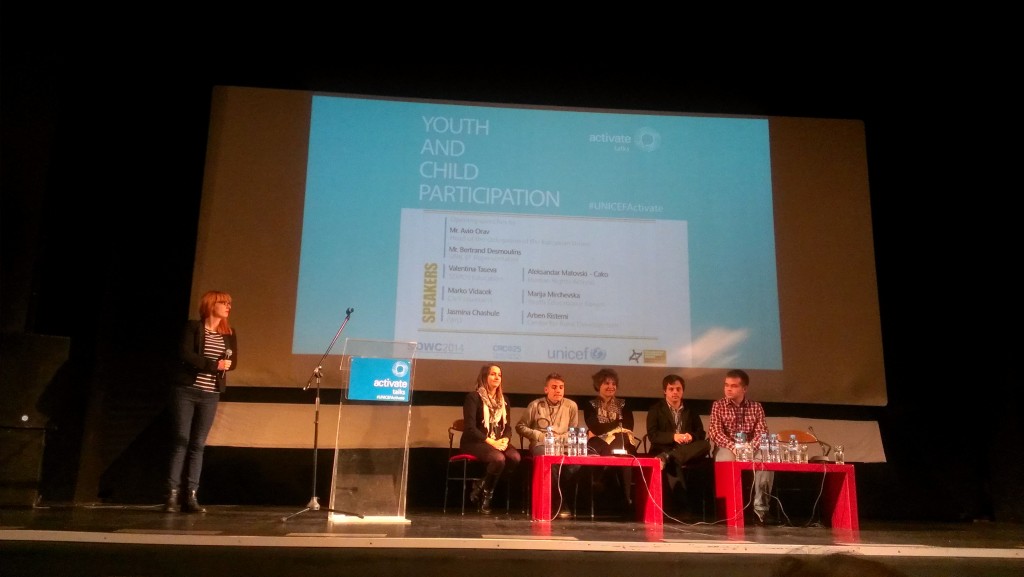 In order to celebrate the 25th anniversary of the Convention on the Rights of the Child, the Youth Educational Forum (MOF) together with UNICEF invited one hundred youth workers, volunteers and activists for a conference. The conference “Activate Talks” was held at the Youth Cultural Center in Skopje on 27th of November and hosted the Head of the Delegation of the European Union, Aivo Orav, and the UNICEF representative, Bertrand Desmoulins. Representatives from CID attended the conference as long-term partners of MOF.

The conference presented six successful stories of young people who are socially active and who wanted to share their experience. Valentina Taseva presented her program that encourages the ladies to step into the world of web design – the most innovative industry of the moment. Marko Vidachek, who is 14 years old, amazed the audience as the ultimate activist – while being a photographer, a journalist, an actor and a good speaker, Marko believes that dedication is the key to enjoying life at its fullest. Jasmina Chashule presented the concept of trash fashion – a good way of enjoying the process of recycling trash, while Marija Mirchevska from MOF talked about the importance of high-school unions and what can be achieved when students acknowledge their rights.

Aleksandar Matovski, also known as Cako, used his personal example to deliver the message that people with physical and mental challenges can and should be integrated into society and given the space to conduct their activities in a regular way.  The only way to erase stereotypes is to rethink the way we treat them, believes Cako who writes poems and has a radio show on the MOF Radio. Finally, Arben Ristemi stressed the importance of giving the young people the space to manifest themselves, because it the best time to start working towards the chance that we want to see is now.

The presentations were followed by a debate that touched upon issues such as interethnic conflicts and ways to deal with them, gender balance, youth inclusion from vulnerable layers and ways to approach formal education with innovatory ideas. More information on activities related to youth participation can be found on the Official Page of the Youth Educational Center and Tweeter, under the hashtag #UNICEFActivate.