Flashmob on No Hate Speech Online: volunteers tell their stories 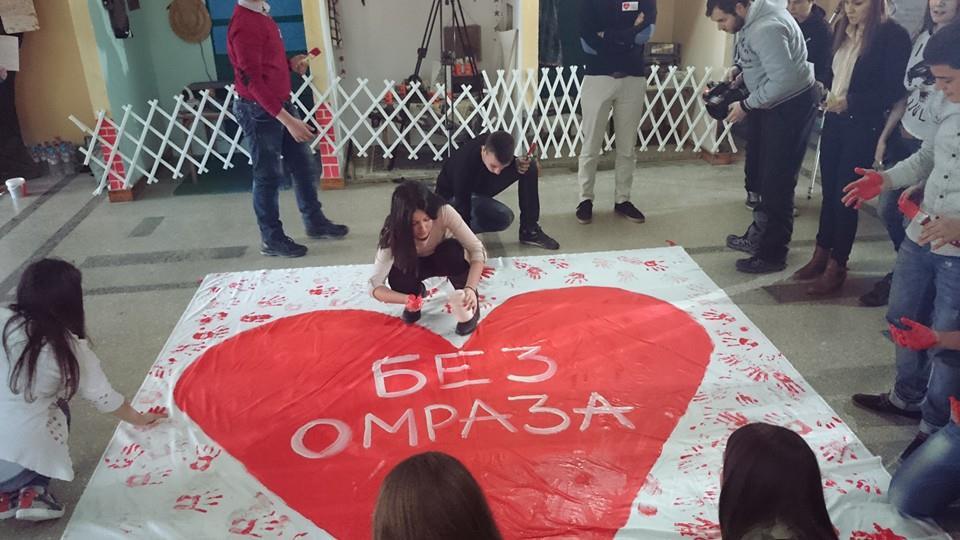 On the 19-20 of February, three schools in Kumanovo were lighted by the energy of young people participating in a flashmob, organized in the framework of the No Hate Speech Campaign. The flashmob took place in the primary schools „Kocho Racin”, „Naim Frasheri” and „11ti Oktomvri”. Our volunteers and activists are sharing their experiences as part of the organizing teams:

First of all, I must say that I love working with children, so I was very happy to know that I would spend a whole week working on the flashmob. I was responsible for the project that took part in the primary school ”11ti Oktomvri’’. The aim of the project was to promote the No Hate Speech Online Campaign, that CID is very much involved in, and raise awareness especially among children and their parents about online safety and cyber bulling.

The students that I had the opportunity to work with were very openminded. We used educational activities from the Bookmarks Manual of the No Hate Campaign, discussed broadly many topics, and they shared their opinions, which sometimes  inspired me as well. The students liked learning new things,they were also very curious about what CID is doing, what are our aims, projects and targets.

They are willing to work again with us, and I really hope that we will create new opportunities for students and young people to grow and learn. We also had a lot of fun with them. To hate is easy, to love takes courage.

I was part of the team that organized a flashmob on No Hate Speech on the 20th of February in the school “Naim Frasheri” .

The students  who participated were from 12 to 14 years old. They looked excited and happy to participate in an artistic activity. Very soon it got too crowded because there was music in the school, which is unusual and everyone wanted to see what was happening.

The flashmob lasted for about 20 minutes from their day in school but it was – just as they said – AMAZING.Also there were a lot of teachers who joined, together with the school Principal.

What I liked the most about all that was the communication with the children and their smiles, they were so happy. So I’m happy that the time we spent together with these activities inspired some fun and non-formal learning in the school.

‘This is the best thing that has happened in my life’; ‘Can you come one more time in our school? I want to do this again.’; ‘Can every school break be like this one?’; – these were just some of the comments I heard from the students from the ‚Kocho Racin’ school. I could see the happiness in their eyes. I was so happy that the activity that we organized inspired the students and the school to organize these kind of activities more often.With our flash-mob we drew a big red heart, wrote ‘No hate’ inside it, wrote inspirational messages, we danced, we shared smiles and warm hugs. I felt their age, ten years younger. Everybody was happy. We left with hearts full of love.

Other children who were not  participating in the flash-mob were interested and approached us. At the beginning some of them were shy and needed a little help to get courage to join us but later everybody wanted to make a print of their hand on the drawing or write a message. Even some of the teachers wrote messages. Everybody had a lot of fun.

We tried and I think that we succeeded to share the message for respect in the online and offline world, to start new friendships and to spread love, not hate.