The students’ movement in Macedonia: a plead for equal representation 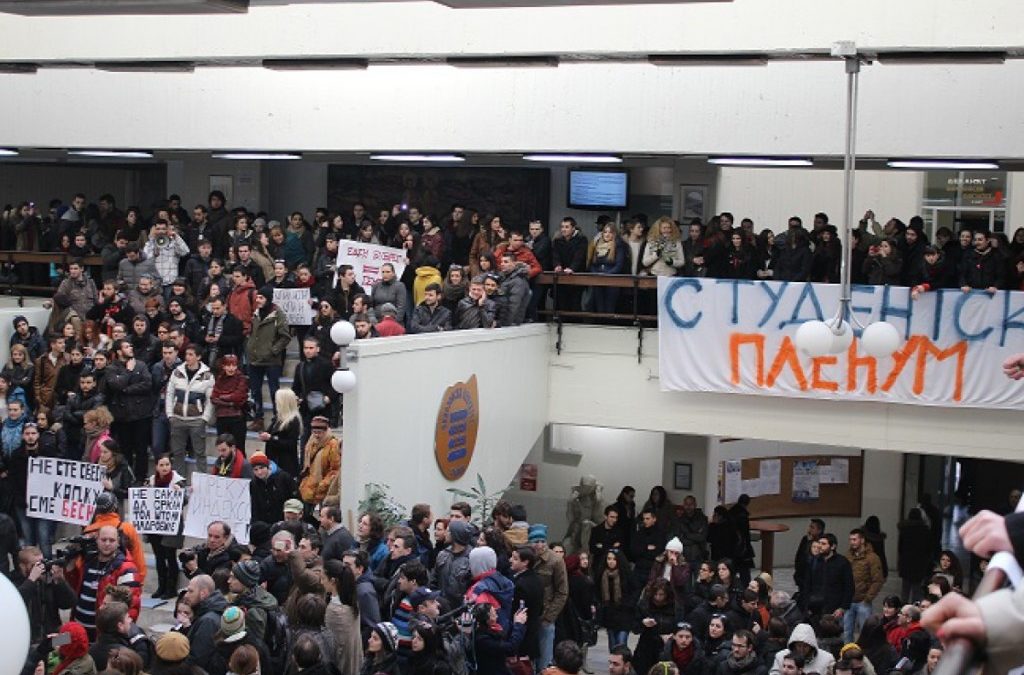 During the past months Macedonia has been shaken by protests organized by students dissatisfied with the current status-quo of the educational system. By now everybody heard of it in one way or another, since the phenomenon is covered by international media and supported outside the country. And because it is indeed an issue worth discussing, let’s get a closer look at what the student movement is and why it is relevant.

Studentski Plenum is the name taken by students to identify their movement: protests that started in November 2014 have gradually transformed into a full-fledged occupation of the University space. While the classes were boycotted, students together with their professors (who created their own Professor’s Plenum) could be found on the premises of the University, giving alternative lectures, organizing debates on relevant topics and informing students about possible actions undertaken by the Plenum.

We, the young people who develop their activity in CID, were captivated by the events in Skopje and decided to pay a visit to the campus of the occupied Ss. Cyril and Methodius University, to discuss with the students about their motivations and plans. This is what we “uncovered”:

-the students are protesting against the newly-adopted law on education that introduces an external examination. The government justifies the examination as a tool to improve the performance of students, but the overall opinion of the students is that this is a superficial reform that doesn’t go deeper into tackling the issue of performance. Students claim that the law goes against the Bologna system, which specifies that universities and other educational bodies can reserve the right to decide upon the preferred method of grading.

-apart from the new law, students are denouncing the deplorable condition of dormitories, the lack of funding for the state university, the lack of adequate representative institutions for the students that are not infected by corruption and often sudden changes in the educational law. This indicates that there are many structural problems with education in Macedonia and that the external examination functioned as the drop that filled the cup.

-in order not to be labeled or associated with a political parties, the protesting students are keeping a distance from organized civil society groups, trying to promote an independent and self-sufficient body that represents individuals and not interests. Studentski Plenum is a horizontal movement, self-governed and non-partisan.

-so what are students hoping for? A more democratic process of decision-making that would involve the student body in a transparent process with suggestions based on a needs-assessment.

While we were storming the students with questions, a wave of young people stormed inside the main building, spreading the news about the agreement reached between the students and the Ministry of Education: the government promised a new educational law in which the students will be consulted by forming working groups. It happened on February 24, after three months of troubled waters. Acclamations of joy filled the room, and our discourse changed its direction. We asked them: “Now what?”

The occupation was over, they said. But the Studentski Plenum is not planning to disband. They promised commitment to their cause of fighting for better conditions for students, including a better representation. We wished them the best of lucks – after all a movement of this dimensions should not be extinguished after the first reached agreement.

We all feel happy that we had the chance to witness a social movement that is unprecedented in the history of independent Macedonia. It encourages us to believe that our input is contributing to developing a young generation that wants to be better, stronger, more empowered. We will definitely keep following the situation closely, with all our support available.