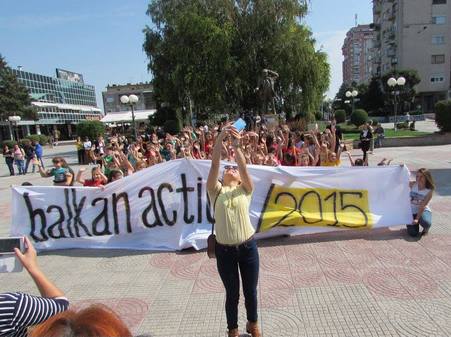 Encouraging active youth participation has always been a key priority for CID. This time, the youth of Kumanovo was invited to participate in a flashmob organized on the Main Square and involving members of the CID Volunteer Club, a dancing studio group and high-school students from Goce Delchev and Nace Bugoni.

The flash-mob that happened on the 23 of September is part of the BalkanAction project, a movement that gathers more than 1900 organisations from more than 145 countries who are committed to fighting for a better future. It was organised by the Center for Intercultural Dialogue (CID) and gathered around 150 children and young people. The flash-mob consisted in a dance, with which participants dressed in yellow, red and green shirts wanted to draw attention to the following sustainable development goals: poverty, gender inequality and climate change. The project is co-implemented by CHRDC from Serbia and Beyond Barriers from Albania.

We talked to the organisers of the flash mob, Tamara Lazarevska and Stefan Kraljevski, about their experience:

Tell us about the project. What are you aiming to achieve?

Stefan: The project seeks to address the Sustainable Development Goals that were set until 2030 by raising awareness among the population on the need to act upon them. Of the existing 17 goals, we decided to focus on three: poverty, inequality and climate change. It was designed in 2 phases: phase I – short interviews with people from relevant fields discussing the issues and proposing solutions for them; and phase II – a flash mob, intended to bring the message to the masses.

The flash mob gathered all generations in the square. What were the challenges in making it happen?

Tamara: Mobilizing the children to attend the rehearsals proved to be a challenge. We tried to explain them the whole idea in an accessible language, and the solution we found was to dress them in shirts of three colors – green, yellow and red – resembling the traffic lights, which stands for drawing attention to our message. A personal challenge for me was the fact that I was involved in organising a flash mob for the first time and working closely with a very young group of children, who require a specific approach.

What would you highlight from this experience?

Stefan: It was the first time I was being in charge of a flash mob as well, so have to mention the satisfaction of bringing to an end successfully our activity. I was responsible for logistics (shooting the interviews, creating the flyers and setting up the musical part), and I enjoyed the enthusiasm of the participants in the flash mob.

Tamara: The most important thing to remember is that, whatever you do, you should have fun doing it. Through the rehearsals, participants managed to make new friends, they were hanging out and discovering new ways of spending their free time, which resulted in a good collaboration on the day of the flashmob.  On the square we had children with parents and grandparents all together, which already sends a good message – anybody can get involved, if they wish to do so.

The flashmob involved children and young people from Kumanovo and reached the local public through media, but the videos will be available on the official webpage for everybody to participate and share their opinion on further action.