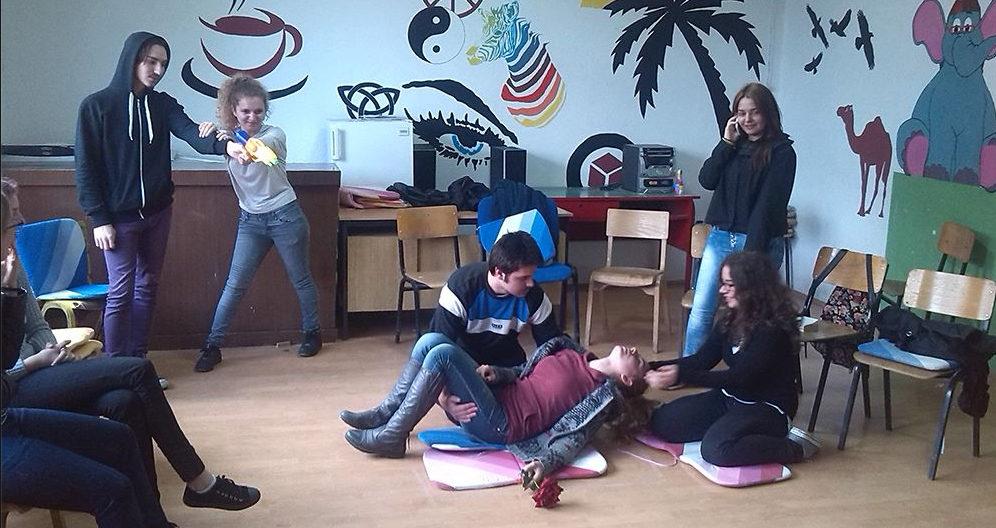 If lately Multi Kulti has become so busy it is hard to find free space on its schedule, it’s because a lot of things are happening. A new series of workshops started in October, under the framework of the Cube project. Every weekend, young people are participating in recycling and performance workshops, and judging by the smiley faces that leave the building in the afternoon, they are making the best of it.

The “Recycling arts” workshop is being held on Saturdays. Around 20 young people are meeting there to explore their imagination and create new things from used materials, and their creativity has no boundaries.

Blerta Deari shared with us her works, which are sending a strong message to the world: in the picture above, four birds are standing on a string, one of them being turned upside down.

”I want young people to know that it’s okay to be different, they don’t have to be afraid to show their personalities.” She believes that this world needs more kindness, idea which is hidden in her other work, the statue of goodness (pictured above).  “We cannot fight evil with evil: we need kindness and understanding to light our way, this is how we can create a better world.”

Other works that they created include a hanger made of tree branches, a pen holder, a vase, and amazing dresses made of plastic bags, old newspapers and garbage bags. Don’t they just look fresh and creatively interesting?

The „Theatre and performance” workshop is being held on Sundays. The group, which is composed of 25 people, is preparing a theatrical performance that will be held on the central square in December. The piece depicts everyday situations in Macedonian families, treating issues like generation conflicts, neighbor relations, tensions among young people, future prospects and people’s attitudes towards life. The performance contains dialogues in Albanian, English and Macedonian.

While the time of exhibiting the products of a two-month work is approaching, the excitment is growing. Regardless of how well the performance will go, everybody seems satisfied with the process: they made new friends and they had a great opportunity to develop their oral skills and have some fun while doing it.