Hug for Rare: members of CID Academy hug for the campaign (GALLERY) 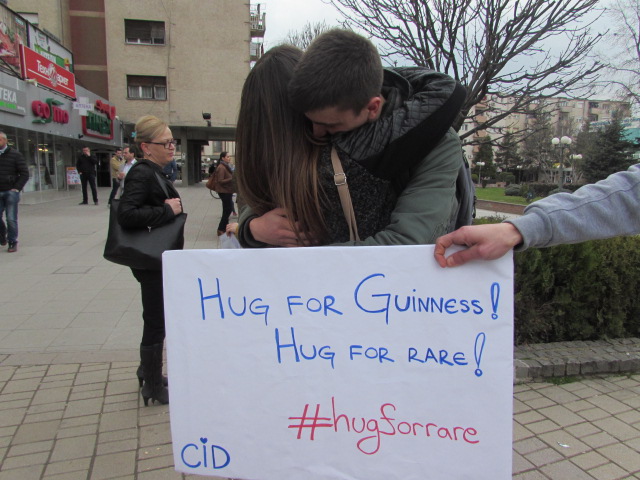 Every year, on the last day of February, the world marks the Rare Disease Day, whose main objective is to raise awareness amongst the general public and decision-makers about rare diseases and their impact on patients’ lives. This year, an initiative to collect the biggest photo album with hugs in order to break the Guinness record has mobilised people from all over the world (more info about the initiative here).

CID Academy joined the challenge and organised an action in Kumanovo to gather hugs for the campaign. Enthusiastic young people approached them to take a photo and contribute to raising awareness about rare diseases.

Marija Krstevska, who came up with the idea to take the hugs to the main square and involve the passing-byers, shares with us her thought:

I saw the post online and I immediately said that I’m in because I love hugging. I knew that I would do it even if no one else would like to organize and help so I waited for the day I would have free time, wrote in the group to set a meeting and prepared for a lot of hugs. I even put on my favourite t-shirt with ‘free hugs’! Aproaching people and explaining what the campaign is about was interesting and awkward because some people didn’t even want to hear us, some of them thought it is some political propaganda or that we want to collect money… But also there were people who carefully listened to us and wanted to know more. It was really intersting and fun and I will definitely do more activities like this.

Check out the photos by clicking on the thumbnails in the gallery below: