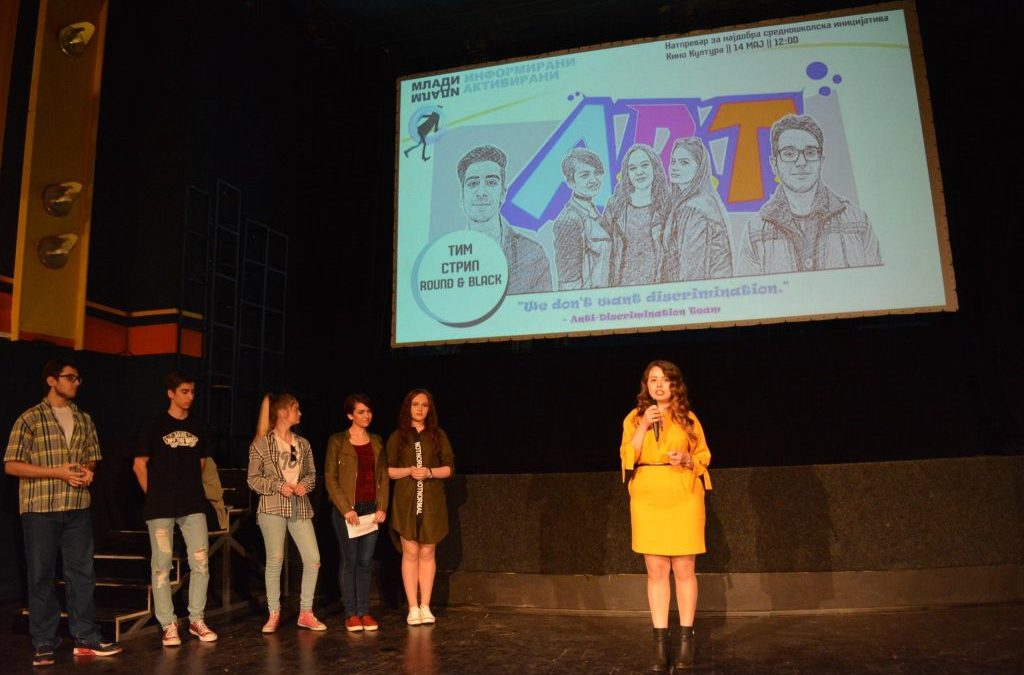 When it comes to youth participation, the results are most visible when the youth comes together to create something. This time the youth from three cities – Kumanovo, Skopje and Veles – came together to share their work of the past 6 months on different initiatives. The long-term project, organised by CID, Youth Can and H.E.R.A, is named ”Youth Informed, Youth Activated”, and included a series of workshops organised in the three cities with the purpose of creating the working groups.

The eight teams that participated in the competition worked on the following initiatives: organising workshops on gender equality, violence against women and cyber-bullying, ecology, shooting videos to lobby for a cultural center, making a comic strip about non-discrimination and a radio podcast about promoting youth rights in schools, encouraging young people to participate in debates, etc.

From Kumanovo two teams of high-school students were present at the meeting. The team ”BOOM POW” presented a radio podcast that promoted the workshop ”We learn law”, which encourages young people who want to study law to learn more about the topic before choosing the university degree. Dejan Petrovski, Helena Zguma, Bojan Stojcevic, Darko Angelovski and Katerina Ivanovska, mentored by Mila Josifovska, worked on the podcast for 4 months, learning how to record an interview, how to create an online radio, etc. Round and Back, the second team, created a comic strip in which they explore the topic of bullying and discrimination and present various ways in which young people can react to address such situations. The team was mentored by Marija Krstevska and included Milan Dimitrievski, Nina Ivanovska, Kamelija Krstic, Erzana Maliqi and Metodija Stojanovski.

Despite the fact that the competition had to produce one winner, all the teams were received with great enthusiasm and support from the jury and from the public.  The great variety of topics chosen by the youngsters was also a pleasant discovery, opening space for future cooperation and involvement of these young people in bigger projects and initiatives.