Confessions of a volunteer: Jannika 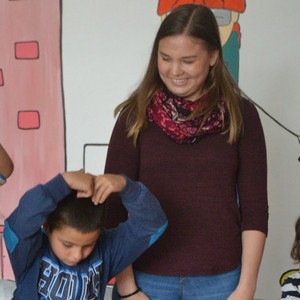 Three months ago, when I arrived to Kumanovo, I did not know much about the country, let alone the city, I had just moved in. Having finished my Masters degree in International Migrations and Ethnic Relations and having worked in a transit-center in Sweden, I was keen on seeing how the refugee-situation looked like in the southern Europe, in so-called transit-countries. The EVS project about Acceptance and tolerance hosted by CID, aiming to raise awareness of refugees and increase tolerance among the young Macedonians, sounded like a perfect opportunity for me to gain some professional experience and to get to know a new country. Now, after three months I feel like home here in Kumanovo and wish that I could stay longer; there would still be so much to do, to learn and to experience. One thing is for sure; I will be back to Balkans very soon!

During these three months I have worked in the Tabanovce refugee-camp with LEGIS, organizing different activities for children (from crafts to sports and language-classes to writing postcards), observing the conditions in the camp and sharing my experiences by writing articles, having workshops in a high-school about the topic and organizing events like photo-exhibition, living library and a public debate for the habitants of Kumanovo. On top of that, with other EVS volunteers, we have organized activities such as language exchanges, movie nights and creative workshops in the MultiKулти youth center. Working in the camp has been lot what I expected; not always easy trying to do your best when there often is not much that can be done and trying to collaborate with people whose views and values differ a lot from those of humanitarian work; but it has also been lots of good moments full of joy and laughter spent both with children and adults in the camp. Having studied and worked about the migration in France and in Sweden before, the problems and the discourses seem overall pretty much the same, even though each country obviously has its particularities depending on the situation; however, the problems are more accentuated here and the attitudes in general more negative – might be because the migrants do not (intend to) settle down in Macedonia, thus most of the locals still have no contact with them at all. During my time here I hopefully have managed to change some of the attitudes, or at least a tiny bit.

One of the best things about the EVS is the opportunity to work on a project of your interest, on something you believe in and feel like you can contribute to. In the framework of our project, we were lucky to have quite a lot of liberty which permitted us to divide the tasks depending on everyone’s skills; for example, I was the one having experience in transit-centers, hence I visited the camp regularly whereas my colleague, talented in IT, was in charge of designing posters, promo materials and editing videos. Apart from gaining professional experience and having a chance to discover a new country, the best thing about EVS is working with people from various backgrounds, creating contacts that can be useful in the future (professionally speaking), and making lots of new, amazing friends, both with locals and other EVS’ from around the world. The question one often asks himself when working in NGOs, especially related to human right issues, is this: will what I do change anything? And yes, I admit, probably the hardest thing in working in such conditions is the feeling of frustration of not being able to do anything. The overall situation is often so complex and difficult that it makes you feel hopeless. In those moments it is important to remember that even small things you do matter, although it is just bringing a smile to someone’s face. Maybe those small things feel like nothing, but if we all do something small, together we will create something big.