MultiKulti: Making an ‘Elka’ (Christmas Tree) and other decorations for the holidays 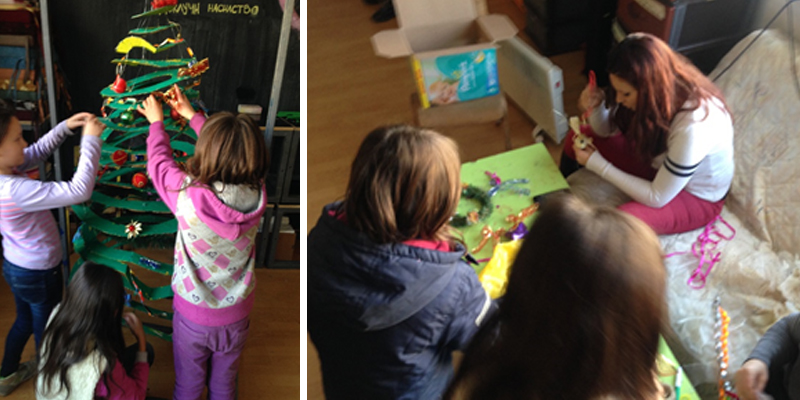 Just before the official date of Christmas, we engaged in making a ‘Christmas Tree’ or as it is called in Macedonian an ‘Elka’ from recycled materials as well as other decorations for the holiday season. The idea was initiated by one of our youth workers, Ines, from an article she read from America. The tree was made by cutting a large circle out of a large sheet of cardboard and then cutting more circles from the outside in until they progressively got smaller. These were then glued along wire and hung from a metal frame, forming a cone-like tree.
The group of young people were aged from 6 – 13 years old and were a mix of ethnicities and religions. The whole day was a great day with a mix of seasonal songs, snacks and refreshments, as well as many different decorations being created. The decorations were used to decorate the youth centre for the holiday season, which was just in time for the CID New Year’s Party, held in MultiКулти the Saturday after. During the workshops we talked about different religious days from different cultures, such as Christmas (Catholic and Orthodox), Eid, Hanukkah and Diwali. The workshop embraced creativity, intercultural dialogue and recycling, all much needed areas for the future.

The activities in the youth center are supported by CIVICA Mobilitas.