Refugees and books: donation of books in the main square of Kumanovo 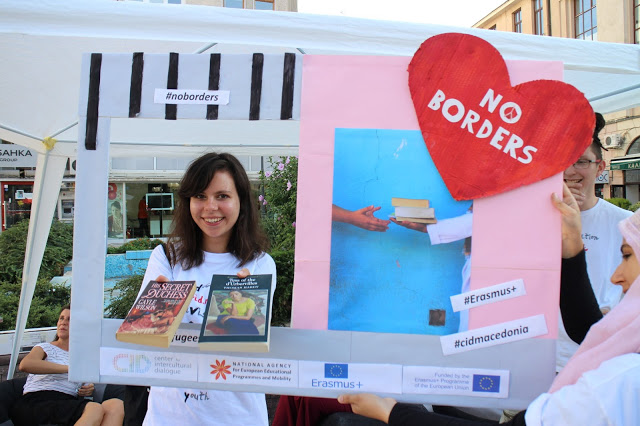 On the 9th of August we, the EVS volunteers from CID, organized an event on the main square in Kumanovo, which had the aim to collect books for the refugees living in a transition refugee camp in Tabanovce, small village just a few kilometres away from Kumanovo and the Serbian border. The event also aimed to inform the people of Kumanovo that, despite closed borders, there are still refugees living in Macedonia, not only in the Tabanovce camp, but also in the Gevgelija camp on the Greek – Macedonian border.

As volunteers, we have the opportunity to work in the Tabanovce camp two days during the week. Some of us are here for two months, some for one month. It is not a very long period, but  we could see how the camp functions and how life over there is flowing. The refugees have covered their basic human needs like having a place to sleep, food, water, medical help. But what we identified as the biggest problem is the lack of activities for them. They have a lot of free time in the camp, but not much to do and they can easily fall into passivity of thinking and acting. It is possible to do some sport activities, for example like playing volleyball, or table tennis, but during the hot days it is not only uncomfortable, but also dangerous, when temperatures go around 45 degrees during the day.

One of the possible solutions how to defeat their boredom and at the same time how to help them to learn something new (for example improve or learn English) is to read books. That is the main reason for organising the event.

At first we planned the basic things like what we want to do during the event? where? when? what materials do we need? how many of us should participate? After answering these questions, we started preparing our materials and, of course, we needed to inform police about our event. The date – 9th of august – was not picked by coincidence, because on this day we celebrate the national book lovers day. But don’t take me wrong, we love books every day for the whole year.

We decided to build three corners with various activities for the event. The first one was a book donation corner, where people could come and donate books (preferably in English or Arabic, but every book was welcome) and talk with us. The second corner was for interviews, where we prepared a wall of photos from Tabanovce, a wall of facts about the refugee crisis and a question wall, where people could stick the sticker with the first word they think when they hear the word ”refugee” or ”migrant”. The third corner was the frame corner, where people could make a photo with our handmade frame and to show their solidarity with refugees in this way. A very important task we had to make was to raise awareness of the people that this kind of event will be in the town. So we made an invitation poster in both Macedonian and Albanian languages and spread it around the town.

At 5pm there were no many people on the square, but as time ran, more and more people (of all ages) started to come to the centre and they were interested in our event. Some people came to donate books, some took photos with our frame, some for the interview about refugees and some just to drink or eat something (yes we were prepared for it). A very pleasant visit was made by the reporter from TV Nova, who made a report about our event and interviewed our coordinator and two volunteers. People seemed to be curious and interested about the refugee situation, and their answers to our questions just proved it. At the end of the event, we all were satisfied, we collected 11 books in English and Macedonian and more money donations than we expected, so the event was successful.

We just hope that this event helped to raise awareness about refugee situation (not only) in Macedonia. The amount of people who showed their solidarity with refugees on that Wednesday made us a little bit positive in that way. We were happy to see that some local people care.

At the end I would like to thank to great employees of CID and to all volunteers who helped us with  the organisation and with running of the action. Thank you very much for promoting humanity.