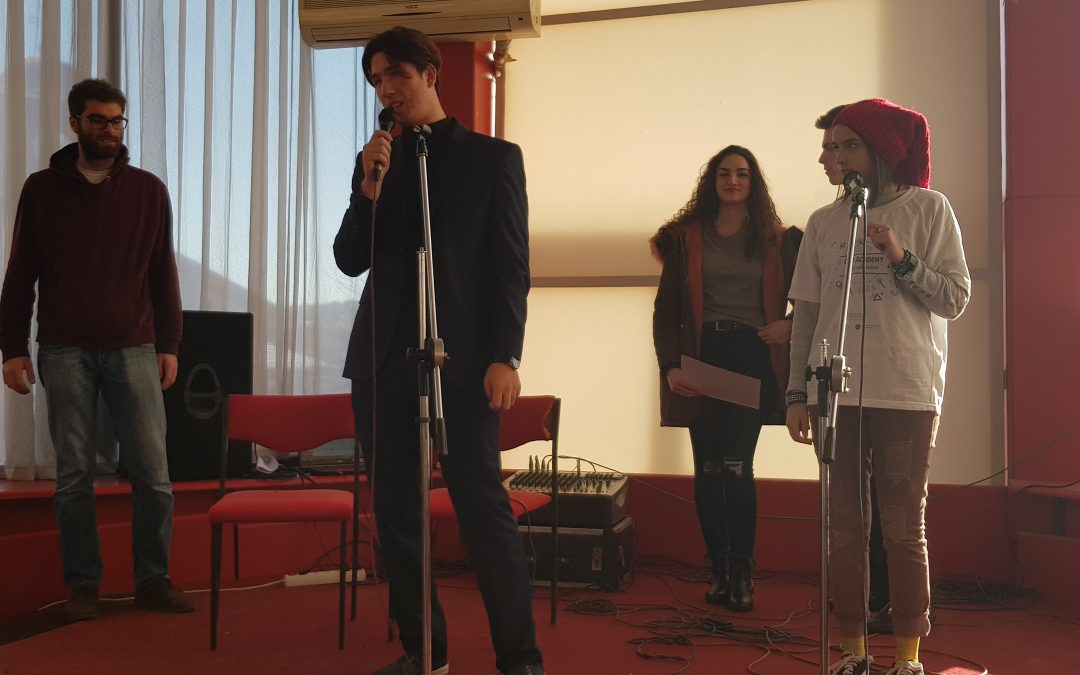 This edition of CID Academy has proved very successful – after a series of 15 workshops on project writing and management, event organising, advocacy and lobbying and intercultural communication, the 20 youngsters that were part of CID Academy felt ready to organise their own advocacy initiatives. The initiatives had the aim to address certain issues that young people in and around Kumanovo face and to find a way to advocate for a change. These are the results:

Our group decided to address the lack of cultural and leisure activities in Kumanovo, so we organised an exhibition, named . We made online and offline promotion in order to collect the works from young people which will be exhibited. The exhibition contained poetry, photos and paintings on the topic ”Youth is working while the city is sleeping”. The public voted for the best exhibited work. More than 30 works were collected.

Kumanovo is a place with a lot of musical talents, but the opportunity for them to show their talent is minimal. This is why the group that Konstantin and I were part of decided to make a musical event named Human Rights Fest, where young people can perform and unveil their passions. Our event was held on the Human Rights Day as it is a human right to participate in the life of the community, to have leisure time by writing, singing and performing in one´s own mother tongue. There were two main topics of the event. One was to create and perform as young people like, the second one was to see how much people from Kumanovo know about their rights and to see how they act on it. During the performance, there were five volunteers who had the task to ask all the people who were there questions about the main topic of the event and to discuss with them. We had a great time, full with joy and happiness, and now we have information about our city and the people who live here. That information will be helpful for us to make future changes.

The initiative ”Public Debate regarding public transport in Kumanovo” was born from the meetings that we had with CID Academy. The lack of proper schedule and enough lines are problems that most young people in Kumanovo face (which was also shown in the research we organised), so naturally more young people joined our initiative. We organised the public debate in the building of the Municipality, with the presence of the Mayor, other Municipality representatives and school teachers. One of the results of the debate was that the next day the transport companies displayed detailed schedules on every bus stop in Kumanovo, which is a good step forward.

Participating in so many workshops with CID Academy prepared us for organizing and planning our own activities. I had the idea about creating a High School Council for a long time, so when I suggested it to my team, they accepted it with big optimism and enthusiasm. In the beginning we were a team of 3 girls, but after a while another two girls joined us and helped us with its realization. We started this initiative with the aim to create a high school council in which representatives from all high schools in Kumanovo will take part. They will have regular meetings and they will try to solve their high school’s problems together. But this is our side of the story. In order to hear the opinions of other students, we decided to organize debates in all high schools in order to get better feedback. Recently, we have finished with all debates and now we are in the phase of monitoring and evaluation. In the meantime, we are planning our next step, which you can follow on CID’s Facebook page or website.

CID Academy for young leaders is a programme that builds grassroots network for youth activists and develops their leadership abilities for collective influence towards decision makers. Targets young people from multiethnic communities and offers a unique space for participation and engagement in youth led initiatives.