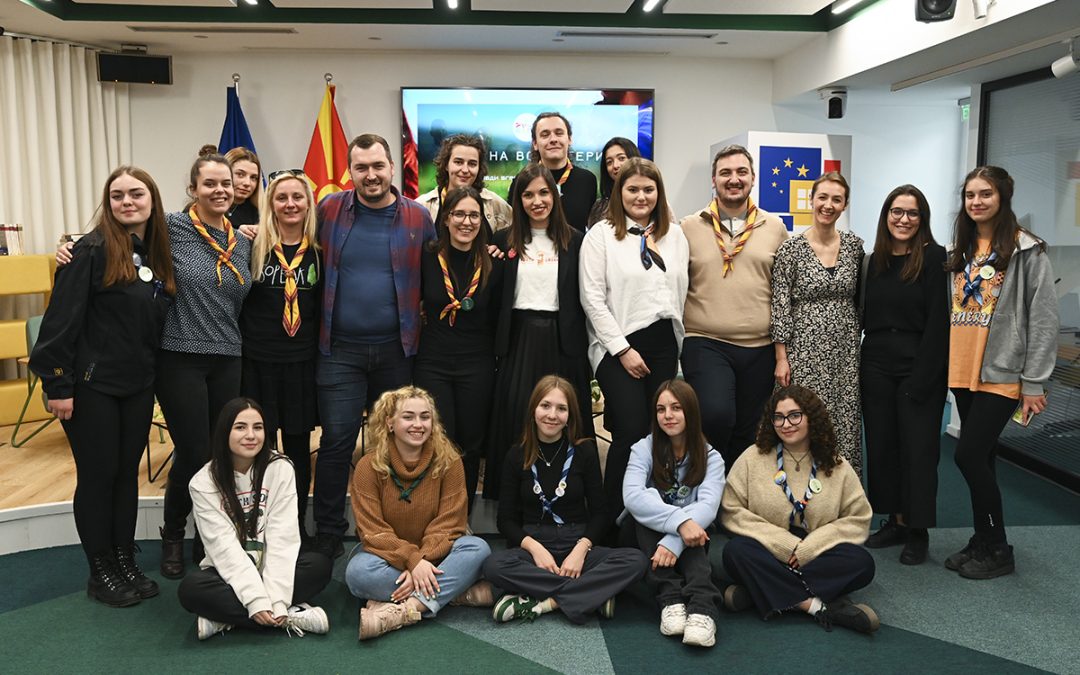 On 5th December, 2022 the International Volunteers Day was celebrated at Europe House, Skopje with a networking event organized by Center for Intercultural Dialogue, Scout Association of Macedonia and Center for Research and Analysis – NOVUS, partners consortium for the project “Youth – Agents of Change”, funded by the European Union, in collaboration with Europe House Skopje, Europe House Strumica and Europe House Kriva Palanka. The main goal of the event was raising awareness of the importance of volunteerism and activism for every person in this world.

The networking event started with welcoming words and presentation of the project by our executive director Nami Isaki. Nikol Klesova presented the manual “Local Youth Pathways” which was created in the framework of the project, and it describes the mechanism for volunteering on a local level in the municipalities. Next on the agenda was the panel discussion on the topic of Activism moderated by Andrijana Tashevska. 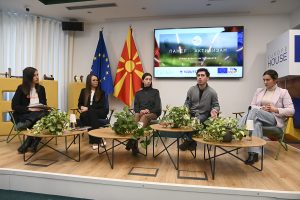 Guest speakers were Marija Krstevska, president of National Youth Council of Macedonia and Secretary General of Center for intercultural dialogue, and she talked about the importance of youth activism in the process of making changes and improving our realities on personal, local, national and international level.  As speaker she encouraged all young people to inform themselves about all the opportunities that are offered to them. “Informed youth are active youth and one step closer to fulfilling their needs and solving their own and social problems” – said Marija. Next guest speaker was Mila Jovanovska from Go Green. As a young eco-activist, she spoke about the importance of education of all people, most importantly the youngsters. She emphasized the significance of having both formal and non-formal education if someone really wants to make change in the society.  Blagorodna Peshevski from Europe House- Kriva Palanka was the next guest speaker and she really made it clear that through activism everyone can contribute to making the desired change and have a role in creating better world. The last guest speaker on the first panel discussion was Damjan Zlatanovski, a Young European Ambassador who honestly shared his experience of being activist and what level of impact it had in his life and in the process of creating himself as a person. The benefits and good aspects from being activist that he talked about were inspiring for the listeners and got them interested in asking and finding out about the opportunities that are available for them.   The second panel discussion’s main focus was Volunteerism, moderated by Elisaveta Lukanovska. 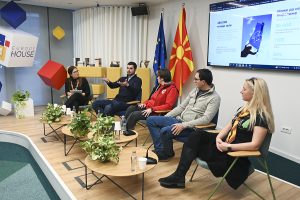 First guest speaker was Snezana Jankovikj, coordinator for Borenka, the biggest volunteer action for reforestation of forests affected by forest fires. She passionately shared her experience with this project, explained the process of implementing the project activities and underlined that the volunteers are the core of everything, especially when making important actions for creating better world. Aleksandra Ristovski, coordinator of the Promotion of Human Values programme of the Red Cross was the second guest speaker. She spoke of all the activities the volunteers in Red Cross have and all the ways someone can become part of that big family. Next, Nikola Stankoski from the Volunteer Center Skopje, spoke about the importance of making local actions, such as the one he did with the volunteers that morning, an action in which they cleared a part of the city where students spend time every day on their way to school. Last, but not least, Marko Gjorgjievski, Director of National Agency for European Educational Programmes and Mobility, shared the theoretical side of the processes of creating and implementing strategies and programs for youth activism and volunteerism in our country. After finishing the two really inspiring panel discussions, Vladimir Kostovski, project coordinator for Youth Agents of Change from Scout Association of Macedonia, presented the scheme for the project grants as a mechanism for supporting the practice of volunteering and activism.

Having 67 participants – teachers, students, Young European Ambassadors, members from CID, NOVUS and Scout Association of Macedonia as well as other organizations active in the field of youth activism and volunteering to celebrate the International Volunteers day by emphasizing the fact that volunteerism and activism remains as the essential tools for developing a peaceful and sustainable communities, and also that getting as many people as possible involved in community service and volunteer work will help us with developing and strengthening both on personal and collective level – shows us perfectly that the event was a huge success.