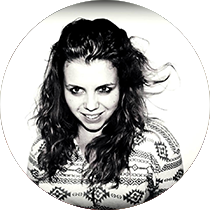 Aleksandra is a young professional actress currently working in the National Theater in Kumanovo and as coordinator of our youth center Multi Kulti. Despite her theater career, she has been working on coordinating, managing and facilitating youth projects from 2006 as part of different organizations and networks. She joins the CID academy volunteer group in 2008. Shortly after that she is part of the organization team of a youth exchange supported by the YiA. From 2010 until 2013 she works as a Macedonian teacher of EVS volunteers and as a co-leader of some EVS projects. From 2015 she is a coordinator of the youth center MultiKulti for the projects ,,MultiKulti Cube” and ,,MultiKulti Social Youth Service”supported by UNDP. She coordinates the regular workshops for high-schools students organized in our center for the last two years. As a trainer and facilitator she is working on promotion of theater techniques as tools for social change. Her first theater tools workshop was organized for local school students in 2008. She is currently working on her master thesis in the field of social theater and Augusto Boal’s techniques. She is also starting her education in psychodrama psychotherapy.