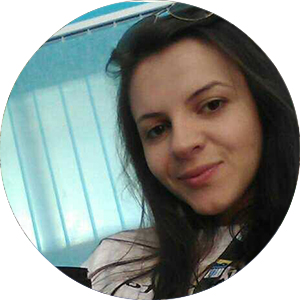 Angela Veljkovska is studying Italian language and literature at the Faculty of Philology at the University Saint Cyril and Methodius. Her experience with CID started in 2010 when she started attending the journalism workshop in MultiKulti. In 2012 she participated in the Youth Exchange on the topic of “Unemployment” in Banja Luka. One period she was not an active member, but in 2014 she met the EVS volunteers that where living in Kumanovo and became an active member of the CID volunteer club. In 2015 the CID Academy started and Angela became a member. As a volunteer and a youth worker she participated in many events organized on the local level by the organization. In October and November 2015 she was a facilitator on the workshops “Drama and theater” and “Performance” workshops, in the MultiKulti youth center. In April 2016 she got involved in the Restart project that took place in Istanbul, Brussels and Mollina. In this period she and two more volunteers organized a workshops on the topic “Gender equality”. In June 2016 she was a facilitator on the Youth Exchange “To Be or Not to Be Formal” in Kumanovo and Ohrid.

UYD 17: Marija and Angela about yet another great experience in Mollina