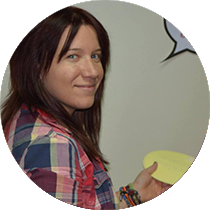 Elena joined CID in 2014 as an EVS volunteer, after participating in several activities organised by CID. Her newly-discovered interest in the field of youth work and civil society organisations determined her to want to continue working in Kumanovo. Joggling between PR responsibilities (website management, social media, newsletter) and developing skills in other areas (facilitation, project writing, volunteer management, event organising), Elena is constanly seizing the opportunity to learn new things and develop new skills. Her interest in working in the CSO field came from a broad experience of living abroad and focusing on the study of interethnic conflicts and community development (after completing a Bachelor and Masters Degree in International Relations and European Studies), but also from taking part in several European and international projects with a focus on interethnic dialogue and youth participation.

”Democratic Awakening in Macedonia: Expect the Unexpected”, in Journal of Global Politics and Current Diplomacy (no.3, 2015)